You know that old saying, that March comes "in like a lion, out like a lamb"?  Do you think that whoever started it (I'm thinking Aesop, maybe) left the middle of the month out because they didn't know of any animals that were basically tornadoes?
via GIPHY

Obviously, news of the Tasmanian devil hadn't made it off of Australia yet when Aesop wrote that saying.  I mean, it's not just me, right? The middle of this month has been a big crazy swirling mass of highs and lows and I have been hanging on for the ride, but just barely.  It has also torn books right out of my hands, and so I am trailing my monthly goal! Luckily, the end of the month does, at this moment, look like smooth sailing. So I am optimistic that I will actually get there.

In the Bookbag Last Week
Despite the insanity of the middle of the month, I did manage to read two books, and they were both intriguing in their own rights, although - why lie? - I completely fangirled out over Hamilton: The Revolution. I was fortunate enough to see the musical this week, and so I am really in the middle of a full-on, Beatlemania sort of crush on the show in general and on Lin Manual Miranda's brilliant mind in particular. Meanwhile, I had a hell of a tough time writing my review for The Immortalists, which is unusual for me, and I'm not really sure why! But I'll stop explaining them and let you read them yourselves:

Hamilton: The Revolution by Lin-Manuel Miranda

Here's the thing: this looks like a coffee table book. It's big and heavy and features tons of pictures, the entire libretto (with footnotes by Miranda!), and paper so gorgeous that you want to slide into the book somehow and take the world's most luxurious booknerd nap. But once you're done admiring all of these details and leafing through it, take it into your lap and read it, because it's a serious book and deserves a close reading (or three). Bonus points if you finish it before you see the show!

The book, written by Miranda and Jeremy McCarter, tells the story of the show itself, from the inspiration that struck Miranda as he read a biography of Alexander Hamilton while on vacation, through the seven years of creating and revising and creating and revising, all the way to the Broadway premiere in 2016. Along the way, you'll learn a lot about, among other things, the history of rap music in America, the profound brilliance of Miranda and his "Cabinet," all sorts of tidbits about Hamilton and the other Founding Fathers, the details of the grueling Tech Week before the show opened at the Public Theater, how fashion designers helped solve the problem of what to wear on stage, how "Hamilton" is making its way to the kids who will really benefit most from seeing it, and so much more! It's a pirate's chest chock full of treasure.

As a historian, a writer, a reader, a lover of the arts, a hopeless musical theater kid, a proud and patriotic American, a parent, and a human being, I have been truly swept away by the density of "Hamilton" and its many, many layers of brilliance. This book helped me fall even deeper in love with Lin-Manual Miranda, with the extraordinary stories and ideas that spring to life on his stage, and (to me, most importantly) with the unfinished project that will always be America - that is, its patriots' timeless devotion to the prospect of forming "a more perfect Union." Whether it be through art or assembly, by casting a vote or crafting a tune, Americans always have and will continue to reinvent, reassess, and reaffirm the ideals on which this nation was founded. Hamilton: The Revolution shows us how the vast panoply of actions taken today by those seeking progress and positive change harken back to the actions taken hundreds of years ago by those with similar ideals and energy. Long live the revolution! Rise up!

The Immortalists by Chloe Benjamin

I'm not telling you anything you won't learn by reading the endpapers, so here's the deal: this story begins with a trip. In 1969, four young siblings visit a fortune teller who will tell people the date of their deaths. The prophecies each kid in the Gold family receives, not surprisingly, become the foundations upon which the stories of their lives - and therefore the book itself - rest. Readers experience the lives of each child in turn as the rest of the book unfolds. We travel with youngest two (baby Simon and younger sister Klara) as they flee the confines of New York City for the anonymity and gritty freedoms of late 1970s San Francisco; Simon doesn't even finish high school. The older siblings (Daniel and Varya) stay closer to home as they come of age, but both pursue multiple college degrees and dutifully help their widowed mother.

Benjamin brings some of her characters vividly alive. She begins with Simon, Ma Gold's favorite child and a study in contrasts. He feels smothered by his mother's attentions but also yearns to find a lover who will be as devoted after he skips town. Meanwhile, he also seeks to enjoy the wild pleasures available to a (very young) gay man in San Fransisco and throws himself into a career as a dancer. As his life draws to a close, we learn how his prophecy may have been the source of many of his decisions. Klara, too, has a wild side. She is also deeply troubled and obsessed by her prophecy, which leads to an obsession with magic and a pervasive ambition to become the first truly successful female magician. As magic becomes her lodestar, will it also prove to be her downfall? Only time will tell! The older siblings are not nearly as vibrant as the younger two, but they each have compelling and strange stories that will keep readers engaged.

And here's where it gets disappointing, at least for me: Benjamin's close attentions to each character and his or her individual plots comes at the cost of a clear overall narrative. The love between Simon and Klara and the ways in which their lives are intertwined keeps the plot train on the tracks, but as we delve into the stories of the eldest siblings, those connections fail and thus the larger narrative story fails. It is only when we reach the end of Varya's story that Benjamin finally reveals some of the key deeper connections and details that make each person's story part of one cohesive tale. For me, that came too late in the game, and so I closed the book feeling somewhat cheated even as I remained impressed by the lives that Benjamin created.

Even though it didn't satisfy me on several important levels, I still recommend it. It wasn't until I stopped to really consider the overall story that the chunky and awkward bits stood out. Furthermore,  Benjamin reaches pretty successfully to pursue the larger questions of fate versus free will and what really makes a family a family while also adeptly tracing the social and cultural changes in America from the late 1970s to the 2010s. Not too shabby! Three and a half stars.

View all my reviews

See? I told you: one shameless love letter and one awkward explanation. Weird combination but that's just how things turn out sometimes, I suppose.

I don't have five things for you today because, well, they were all "Hamilton" related and I didn't want to press my luck. But I'll just say that every penny spent on that show is worth it, not only because of the joy and insight and blow to the head that it will give you but also because Miranda et al. have committed to doing great things for millions, including hundreds of thousands of the least privileged teens in cities across the nation, those living with HIV/AIDS, and the many communities of Puerto Rico ravaged by Hurricane Maria last fall. Bravo to the hundreds who have created and continue to create this masterpiece! It truly has the capability to be revolutionary.

In the Bookbag This Week
Ah! A visual for you today! I actually am almost finished with both of these beauties and cannot wait to share my reviews of them with you ASAP: 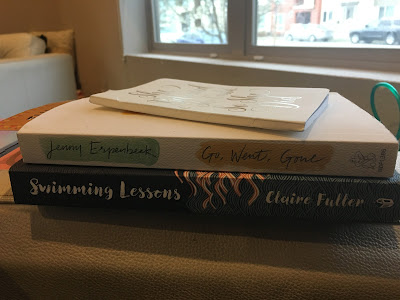 Other irons in the fire this week include Jonathan Miles's Anatomy of a Miracle, which I'm really enjoying, No Turning Back: Life, Loss, and Hope in Wartime Syria, which is one of the most recent books to emerge from the catastrophic civil war and is keeping me on the edge of my seat, and, in honor of Women's History Month, the high-spirited She Caused a Riot: 100 Unknown Women Who Built Cities, Sparked Revolutions, and Massively Crashed It. It's about as far from a the mentally dusty women's history textbook of your nightmares as you can get. Take a peek if you have a chance! And in the meantime, "Look around, look around at how/ Lucky we are to be alive right now."